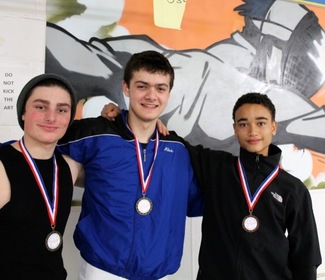 Fencing is an Olympic sport. It is a sport done worldwide by men, women, and children.   It is called "fencing" because it is the use of a sword for offense and defense.  (Offense and defense are usually spelled with an "s" in the U.S. but with a "c" in Great Britain and elsewhere.)

In the United States, the national governing body of the sport is USA Fencing. People train and fence at small clubs throughout the country and compete locally and nationally. Every summer a national championship is held. Competitions are usually divided by skill, gender, sword, and age.


Many colleges have fencing teams that compete through the NCAA.

Foil and saber share similar rules of Right of Way. When both fencers hit each other at the same time, the referee determines who has right of way in order to award a point. For example, the person who attacked (acted first) gets the point. The person who counterattacked (reacted) does not get the point.

Each weapon is electric, meaning that it is hooked up to a scoring machine, so when the sword makes a touch on the opponent, the scoring machine alerts the fencers and the referee by lighting up and buzzing.

Fencing matches are to either 1, 5, 10, or 15 points, depending on the type competition and what round it may be.  Modern Pentathlon includes epee fencing for one touch, but other events usually start out with 5 point bouts that lead to 10 or 15 point bouts in the elimination rounds.  One valid touch is one point. Fencers are halted and reset at their start positions in between touches.

Fencing is one of the safest sports in the world. The protective equipment works very well. The masks are steel. The white uniform is sewn from multiple layers of cotton and nylon, and may also include stronger bullet-proof types of material similar to Kevlar.

Swords have been part of our world history from the earliest civilizations. The Renaissance period saw dueling with swords like the rapier. When dueling was outlawed, there was still a desire to wield swords, and to practice and develop the methods, art, and science, of swordplay. Fencing, as a sport,  developed from that desire. Fencing still retains many of the formalities and courtesies associated with its early history including saluting the opponent and shaking hands after each match.

Fencing has several benefits, including exercise, personal development, social, fun, and for teenagers being a fencer can offer an advantage when applying to colleges. As an individual combat sport, fencing tests you physically, mentally, and emotionally. It is excellent for learning discipline and managing stress.